Animals are amazing creatures that never cease to amaze us with their skills and actions. What do you think about the friendship of a tiger and a goat? And this is not a joke at all, but a true story. Below you will find a story about this friendship.

Amur tiger and Timur goat are probably the only case of friendship between a predator and potential prey. Timur and Amur are kept in a Seaside safari park. This unique friendship between a male Amur tiger and a male domestic goat in 2015 became a very popular topic in the media.
The story of Timur and Amur began in November 2015. A goat was brought to the tiger to be eaten. He was launched into the predator’s enclosure, but when the tiger approached the goat, he fought back and boldly put his horns forward. And since the tiger was often fed in the park, it seems that Cupid was not too hungry and therefore did not want to eat the goat. For such courage and fearlessness, the goat was given the name Timur. 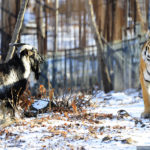 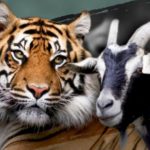 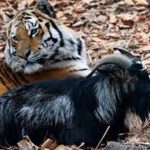 The animals were not settled, and the goat remained to live with the tiger in the same enclosure. After a while, Timur moved into Amur’s dwelling and slept in his place, but the tiger did not mind and gave way to the brave man. After these events, the park management decided not to separate the animals at all, since nothing posed a danger to Timur’s life.

After some time, the animals began to walk and play together. Such an unusual and phenomenal event was called “The Friendship of Amur and Timur”. Information about this spread on the Internet and gained huge popularity in Russia. 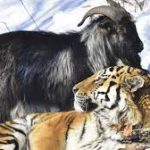 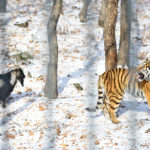 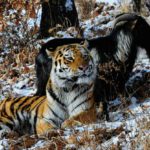 Unfortunately, nothing lasts forever. In January 2016, there was a quarrel between the animals: Cupid grabbed Timur by the scruff of the neck and threw him off the slope, after which the goat needed the help of specialists. Presumably, the reason for the aggression was the irritability of the tiger by the behavior of the goat. Timur underwent successful treatment. In this regard, the management decided not to keep animals in one enclosure anymore. Now former friends could only see each other under the supervision of park staff.

There are various explanations for the friendship of Amur and Timur. The main thing is that the tiger did not attack the goat because he was full. The popularity of the goat and the tiger has become huge, but not everyone positively assessed their friendship. Some were just worried about the safety of Timur’s life, while others sued and wrote complaints to the prosecutor’s office.
The story of the Amur tiger and Timur the goat has become famous abroad. Tourists from all over the world came to see their friendship. In December 2015, a filmmaker from South Korea began filming a documentary about Amur and Timur.

In 2016, the creation of a cartoon was dedicated to this friendship, a musical was staged and even a book was released. A presentation was held at the Exhibition of Achievements of the National Economy (VDNH), where the project of the monument “Amur and Timur” was presented. The sculpture was planned to be installed on the territory of the Primorsky Safari Park. Currently, former friends live their own lives on the territory of the park.