Two baby cats were locked in the underbody of a Tesla for two days. The police rescued the two just in time. 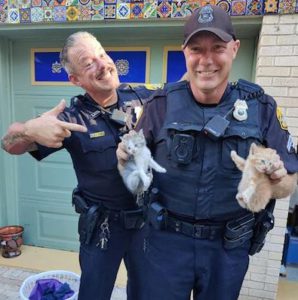 The two baby cats Elon and Tessie are just two months old. But have already experienced a lot. The two babes were trapped in the underbody of a Tesla. If the cats had been trapped in the underbody of a car with an internal combustion engine, hot exhaust gases would probably have simply burned them when the engine was started for the first time. The catalyst heats up to almost 300 degrees within seconds and quickly reaches 1000 degrees.

Electric drives remain much colder. That probably saved the lives of the two kittens. When the Tesla driver heard a meow from his car, he called the police for help. The two Tampa Police officers rushed to the rescue and after almost an hour the babies were freed.

Meanwhile, the cats are housed at Jen Tate. She cares for kittens and cats until they find a new home. On her Instagram account JenzFosterKittens she shared the story of the baby cats. She believes that the cats’ mother hid her babies in the Tesla to get them to safety. The babies were trapped in it for at least two days without food and drink.