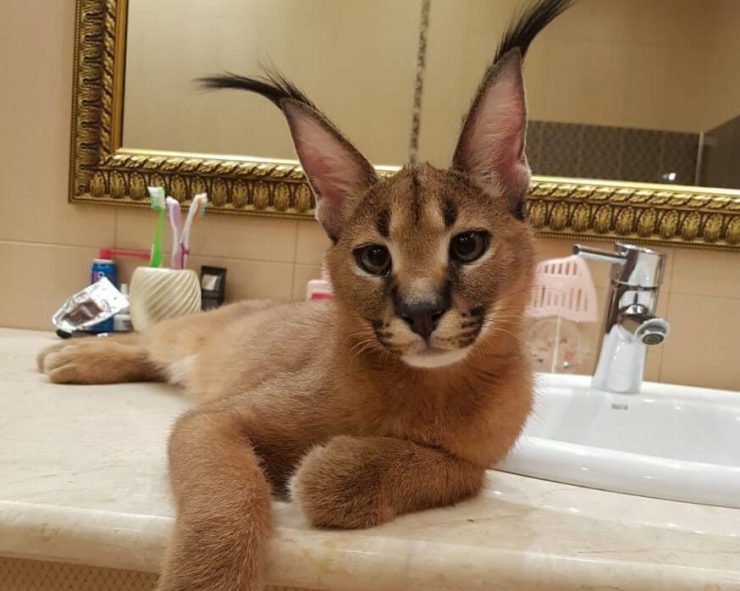 For a long time, this feline predator was referred to as a lynx. After a series of studies, scientists identified caracals (steppe lynx) as a separate species. This beautiful and graceful animal, in many ways, is closer to the family of cougars and African servals.

Caracal in Turkish means “black ear”. The Barbary lynx is the name of the animal in some African countries.

The animal is somewhat similar in appearance to a lynx, but smaller in size and with a long tail. Such a cat weighs 11-19 kg. An adult caracal grows up to 65-82 cm in length (this is without a tail). The tail is 20-30 cm long. The height at the withers is up to 45 cm. Females are slightly smaller than males.

The body is slender and flexible. The limbs are powerful and long, with sharp, retractable claws. The front legs are slightly longer than the hind legs. The ears are almost vertical. Set high, pointed. At the ends of the ears there are brushes up to 5 cm long. The back of the ears, tassels and markings on the sides of the muzzle are black. In Nigeria, there is a subspecies of caracal, which has white ear tassels. The color of the coat is monophonic, similar to the color of the North American cougar. The fur on the back is reddish-sandy or sandy in color, almost white towards the throat and belly. Against the background of the dunes, the steppe lynx is almost invisible. In nature, black animals are very rare. The fur of the caracal is short and very thick. On the paws, the hair is stiffer, greatly facilitating movement on the sand. In summer, the animal sheds, changing its fur coat to a lighter one, but just as thick.

Lives in Asia, Africa. As a dwelling, he usually chooses abandoned fox burrows, porcupines, and can settle in rock crevices. Caracal is a nocturnal predator. He has very sharp eyesight and sensitive hearing. Thanks to its strong physique and powerful paws, during the hunt it can catch prey twice as large as itself. It easily overcomes various obstacles: it can jump up to 5 meters in height. It preys on rodents, birds, and small antelopes.

Pregnancy lasts 60-80 days. Up to three kittens are born in a litter, up to six in captivity. This is due to the fact that in captivity the female receives proper nutrition and care. Kittens are born weighing up to 250 grams and completely blind. The coat color at birth is sandy to reddish brown with dark spots. Their eyes open on the 9-10th day. Milk teeth fully appear by one and a half months. The first molars grow by five months. Then, within six months, they completely replace dairy products. Kittens spend up to one year next to their mother. Older than 1 year is already a sexually mature caracal.

In ancient India and Persia, people tamed these beauties to hunt small antelopes, hares, pheasants, and peacocks. This type of hunting was mainly done by poor people. The caracal was cheaper than the cheetah. It was much easier to keep him. Therefore, the caracal was also called the little cheetah and the “cheetah of the poor.” Now this type of hunting is a rarity. But the little cheetah was valued not only for its hunting qualities.

A tamed caracal is a very kind, affectionate animal. Nowadays, keeping this big cat in the house is a sign of wealth and prestige. Many wealthy people from all over the world spare no expense to buy exotic pets. Not everyone can afford this graceful animal with wonderful tassels on the ears. Prices for a caracal kitten start at $10,000.

Before starting a caracal at home, you need to weigh the pros and cons.

It should be noted that the blood of a predator flows in his veins. Caracal is not a fluffy little lump, but a predator.

You can not get a pet if there are children under 5 years old in the house. If the child is older, then you can buy a caracal. But in this case, the child should be explained that it is impossible to mock the pet. Caracal can “strike back”.

It will take a lot of money, effort and time to maintain and care for it. To tame an animal of prey by nature, you need to spend a lot of patience and care. Proper education will bring positive results. A big cat will become an affectionate and gentle “kitten”.

In the desire to have a steppe lynx at home, love for the animal should prevail, and not the trend of fashion for exotic pets. You can’t just throw it out on the street or give it to friends.

The big cat will not tolerate rudeness and physical punishment. The steppe lynx grown in conditions of hatred and bullying will become a “headache” for the owners.

Caracal is a long-liver. In captivity, life expectancy is over 15 years. Is there any confidence that you will be able to support him for such a long time?

If everything is decided, then it’s time to get ready for a soft lump!

You cannot buy from the hands of a caracal. In pursuit of cheapness, there is a high probability of acquiring a sick animal. Among such sellers, many are chasing only in pursuit of profit. Animals are not always properly cared for. Not all sellers have permits for breeding animals. Without special documents, breeding caracals is prohibited, animals in this case are subject to seizure.

It is recommended to choose and purchase a pet only in a specialized nursery, store or from breeders. It is in specialized institutions that specialists monitor the cubs and their mother. When buying, experts will advise in detail how to raise and train a predator. It is better to choose kittens where breeding is not aviary, but home type. Caracal must get used to a person from birth. Usually babies are taken from the female on the 9th day. They immediately start bottle feeding. Only in this way does the fastest taming process take place. Under the supervision of specialists, kittens are accustomed to the tray and the scratching post.

If breeding animals is not planned, it is better to castrate the caracal at the age of 3-5 months. A neutered pet will not mark territory or try to escape.

Once in a new place for him, the baby will immediately begin to examine it. It will be a great pleasure to get acquainted with all household members. It won’t be without scratches. For about two years, the kitten will be very naughty. During games, it can turn everything upside down. Fun and disobedience will be replaced by bouts of aggression. At this time, the caracal is dangerous: it can bite anyone. His behavior during this period of time resembles the behavior of a difficult teenager: he is also unpredictable, impulsive. You need to carefully monitor the behavior of the animal. If something does not work out, be sure to contact the experts.

In order to avoid diseases, you need to periodically show the caracal to veterinarians. In the clinic, the pet will be given all the necessary vaccinations, prescribe the necessary vitamins. You cannot treat yourself.

It is not recommended to keep a pet in the apartment. The steppe lynx needs a lot of space. A large house is best suited for maintenance. In the yard you can build a spacious aviary. Do not forget that the caracal is an excellent jumper. Therefore, the fence must be very high.

The animal does not tolerate cold. After all, the habitat of the caracal is savannas and deserts. Loves water procedures. It is better to cut the claws of a pet more often with special scissors (claw cutters). There should be several scratching posts in the house. Otherwise, the furniture will be damaged.

Toys – the most various. Buy the same as for a puppy, large and natural. Small balls and balls are dangerous for the caracal – it can be swallowed. Loves new toys. But if you take and hide the old one, and then give it back after some time, the lynx will attack it as if it were new.

As for the tray, kittens are taught to go to the tray already in the cattery. The pet does not bury the excrement, but leaves it on the surface of the contents of the tray.

Keeping with other animals

The best option is if the pets are the same age and grow up together from childhood. Gets along with almost all pets. The exceptions are rodents and birds. Hamsters or a parrot for a caracal are prey. And sooner or later he will catch her.

If a kitten is caught in the wild, then the process of adaptation and domestication can take many years.

Since the food of the steppe lynx in the wild is birds and rodents, the diet cannot be changed in captivity. Caracal needs a full-fledged natural food – fresh hare, rabbit meat, rodents, sea fish. Hare and rodents can easily replace chicken, turkey meat (thigh, fillet, drumstick). It is necessary to give beef (tenderloin or minced meat), sometimes a raw egg. In some cases, the animal refuses raw meat, preferring boiled meat (without spices and salt). The diet can be varied with dry food, but only of the highest class. The pet should receive a full range of vitamins and minerals.

It is strictly forbidden to give pork: it will lead to Aujeszky’s disease (other names are pseudo-rabies, itchy plague). The lethal outcome in this terrible disease is almost 100%. In addition to pork, exclude spiced foods, smoked meats, pickles.

The feeding rate depends on the age and weight of the animal. For an adult pet, this is 3-5% of its weight per day. During the growth period, the caracal can be given more. Feed 1-2 times a day, at the same time. What is not eaten, throw away, and immediately wash the bowl. Once every two weeks, the caracal can be arranged for one “fasting day” (do not feed at all for the whole day). It is beneficial for the animal’s body.

A bowl of water should be freely available.

With the right upbringing, the caracal is a smart, affectionate, playful animal. Gets along well with all family members. Likes communication.

He quickly remembers everything and is easy to learn. In general, the caracal resembles a kitten and a puppy: feline grace and curiosity, activity of a puppy. Quickly gets used to walking on a leash. Classes with an animal are a game and education at the same time. Should continue until the pet gets bored. Having played enough, he opens his mouth like a dog. During periods of special disposition, it lies closer to the owners and rumbles and “chirps” very beautifully. During entertainment, he enjoys ball and suspension games the most. Do not play with your pet with your hands or feet.

Properly educated lynx is easily mastered among people. Caracal is not only an affectionate friend, an exotic pet, he is also a reliable guard. In a country house where such predators live, unexpected guests are unlikely to descend.