Lynx belongs to the feline family. It is the closest relative of a cat, although the appearance of a lynx is very different. 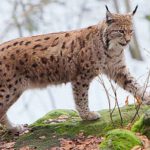 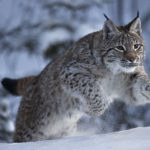 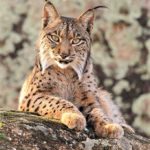 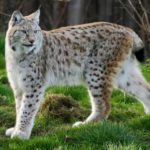 The genus of lynx has four species:

The lynx is a relatively small representative of its family. The body length of an adult male is 76-130 cm, females are several centimeters shorter, about 73-124 cm. The weight of the lynx is 18-25 kg, sometimes there are very large specimens with a weight of 30 kg. The body is short and tightly packed. A small, rounded head with elongated ears and characteristic tassels at the end. The lynx’s muzzle is short with wide eyes, on the cheeks an elongated coat similar to sideburns. At the end of the trunk is a short tail with a blunt end 20-35 cm long . Lynx fur is very thick and soft, has a dense undercoat. The longest fur on the belly, but not very thick. Lynx molt occurs twice a year in spring and autumn. The wool that changed in autumn is more fluffy and thick. The summer pile is short, dense and not so thick with a more contrasting color than the winter one.

The color of lynxes is quite different, it all depends on their habitats, and the species to which they belong. Most often there are lynxes with a reddish-grayish or grayish-brown hue with pronounced large dark spots on the back and sides. Smaller spots cover the legs and chest of the animal.

The lynx’s hind legs differ in their structure from the paws of other cats, they are longer than the front ones. On the lynx’s hind legs there are 4 fingers, and on the front 5. In winter, the sole of the paws is covered with especially thick fur, which allows the lynx to easily move through the snow and not fall into snowdrifts. When a lynx steps at a walk, its hind legs follow the tracks of its front paws. The traces of a lynx resemble the trail of a cat with large paws.

Where does the lynx live?

Lynxes live in the forests of Eurasia and North America. Sometimes this beast is found even beyond the Arctic Circle.

Once the lynx inhabited almost the entire territory of Western and Central Europe. But due to the popularity of lynx fur on the world market and deforestation, already in the middle of the 20th century, lynx was exterminated in many European countries.

On the American continent, the lynx has settled from southern Canada to Mexico. The largest population lives in the southeastern part of the United States.

Relatively recently, lynxes settled in Kamchatka, around the beginning of the 20th century.

The favorite places of residence of Eurasian lynxes are taiga, mountain, coniferous and funny forests. Although lynxes are sometimes found in the forest tundra and in other areas with stunted vegetation, for example, shrubs or reeds. Most often, he chooses dense forests or thickets of young animals for living, where it is easy to arrange his lair.

What does the lynx eat and its way of life

The lynx is a predator, and like all predators, its diet consists of meat. Mouse-like rodents (voles, lemmings), hares, birds (grouse or grouse) become common prey of the lynx. In addition to small rodents and birds, it hunts larger prey: roe deer, spotted and reindeer, musk deer, and seren. If possible, he is not averse to eating young moose, wild boar and izyubrov. Sometimes even a fish can become a lynx catch. In places where the lynx lives near humans, it often hunts domestic animals and livestock.

The lynx goes hunting mainly from 3 to 6 in the morning under the cover of twilight. The only exception is the Canadian lynx, which hunts during the day. She carefully tracks down her prey, sneaks up and stealthily attacks sharply, making several long jumps, each from 2 to 3 meters. If it was not possible to catch the prey the first time, it pursues it for 60-80 meters, and then retreats.

There is an opinion that a lynx attacks prey by jumping off trees, but this is not the case. Sitting on a tree, the animal is still just looking out for her.lynx on a tree

To eat, a lynx should eat from 1 to 3 kg of meat per day, a hungry predator can eat 5-6 kg per day. He always hides the half-eaten large prey or its remains, burying it in the snow, or burying it with earth. She does it so sloppily that other predators easily find and steal all the supplies. A well-fed lynx does not hunt, it prefers not to waste energy.

Often a wolverine and a fox walk on the heels of a lynx to feast on the achievements of its successful hunting. Wolverine often selects prey and drives off the lynx. With a fox, the opposite is true, if a lynx sees it on its territory, it will certainly kill it, but it will not eat. Such aggressiveness towards foxes is due to food competition.

As a rule, the lynx leads a sedentary lifestyle and only in case of a shortage of forage resources migrates to places with a sufficient amount of food.

The mating season for lynxes begins in February and lasts until the end of March. At this time, the female is accompanied by several males, constantly fighting among themselves. At the same time, they make different sounds all the time, growl, meow bassily, scream. Such battles can be heard over very long distances.

Pregnancy in females lasts for 1.5-2 months. To produce offspring, lynxes arrange a den, look for it 4-5 hours before giving birth. More often, tree hollows at a height of 14-15 meters or splits in rocks serve as such a lair. In April or May, lynx cubs are born. 2-3 babies are often born in the brood, rarely 4-5. Newborn kittens are blind and helpless, weighing about 300 grams. Babies open their eyes only on the 12th- 14th day of life.playing bobcats

Lynx kittens begin independent life at the age of 1 year, when their mother drives them away to acquire new offspring. Lynx females become sexually mature at the age of 1.5 years, and males at 2.5 years.

Lynx live in the wild for 15-20 years, in captivity the life expectancy can be more than 25 years.