The Japanese island of Tashiro is called the “Island of Cats”.:

There are 2 villages on the island, 10 temples dedicated to cats, and one large tourist resort “Manga Island” — these are several wooden cottages made in the form of cat silhouettes, and recreation places where you can play with the locals.

A large number of stray cats live on the island. There are only 100 locals here, and they feed these cats because they believe that cats will bring them luck and money, and therefore they take care and protect the locals.

And they, characteristically, were not mistaken: the island was well advertised by the press, and now thousands of tourists come there, on which the locals earn good money.

However, it is not customary to keep them as pets here, because the Japanese are sure that a cat is happy only when it is completely free. 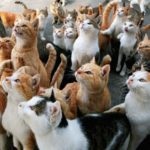 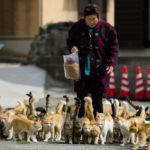 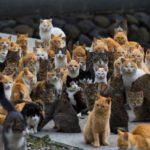 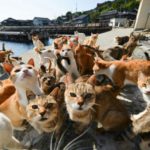 Where did so many cats come from on the island

By the end of the post-war 40s, about 1,000 inhabitants lived on the island. Most of them were engaged in fishing.

Fishing boats, and even larger vessels, were raided by rodents that made holes in the hull, damaged equipment, and gnawed through gear.

While the number of people on the island was much larger than cats, the locals could regulate the reproduction of animals.

But after 2000, the islanders gradually began to leave, and the cats began to breed freely and fill empty buildings, feeling very at ease there on the island…

Such a love of the inhabitants of Japan (and not only) for the island is not surprising.